No endorsement in 9th Congress, GOP 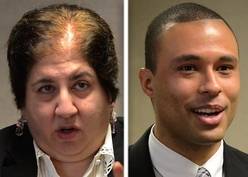 U.S. Rep. Jan Schakowsky, a Democrat from Evanston, is one of the most ardent liberals in Congress, and it is natural that conservatives and, for that matter, many moderates might wish for a credible alternative to her in the 9th District general election in November.

Unfortunately, they won’t find one coming out of the Republican primary on March 18. Neither candidate in that primary is qualified.

Susanne Atanus of Niles says she is running because she wants to restore prosperity for all, but she also maintains that severe weather is a result of God’s anger over same-sex marriage and abortion. Even Jack Dorgan, the head of the state GOP, has asked her to withdraw.

David Earl Williams III of Chicago is a problematic candidate too. He refuses to disclose where he works, and an order of protection was filed against him in December in response to allegations he had harassed a former girlfriend.